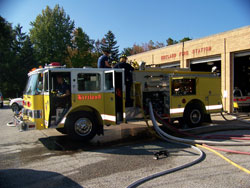 The Kirtland Fire Department has a fleet of 12 vehicles.  The newest additions are a 2017 McCoy-Miller rescue squad, a 2018 Ford Explorer (Fire Chief’s Vehicle), and a 2018 Rosenbauer Fire Engine. The oldest vehicle in the fleet is a 2000 GMC pickup truck used for Technical Rescue.

Station One, located at 8979 Kirtland-Chardon Road was built in 1993.  It houses a rescue squad, fire engine, technical rescue truck, and Shift Commander’s vehicle.

Station Two, located at 10282 Chillicothe Road, was built in 1955.  In 1978 the station was renovated and living quarters were added.  It houses two rescue squads, two fire engines, a brush fire truck, rescue ATV, and a utility vehicle.

Thanks to the dedicated members of the Kirtland Fire Department, we have received many grants for our apparatus and facilities.

The following is a list of the most recent grants: